What Qualifies As Distracted Driving? 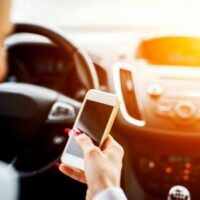 Distracted driving has become an increasingly dangerous trend in the U.S. in recent years. In fact, the Centers for Disease Control and Prevention (CDC) estimates that nearly 400,000 people are injured in distracted driving-related accidents every year. These accidents are particularly frustrating, as they can almost always be avoided through the utilization of safe driving practices and compliance with local traffic laws. Fortunately, drivers who allow distractions to impede their driving can be held liable for the injuries they cause, so if you were hurt in an accident because of another driver’s negligence, you should think about reaching out to an experienced Maitland distracted driving lawyer for help.

A Variety of Distractions

Distracted driving is generally understood to mean any instance of driving while engaged in another task that takes one’s full attention off the road. Distractions can be visual, in which a driver’s eyes are taken off the road, manual, wherein a driver takes his or her hands off the wheel, or cognitive, which occurs when a motorist takes his or her mind off of the act of driving. In some cases, an activity could even qualify as a distraction under all three categories.

Common distractions include everything from talking to passengers, adjusting in-vehicle technology, such as a GPS, eating or drinking, reaching for something in the back seat, or talking on the phone. Occurrences that happen outside of a vehicle, such as “rubbernecking” can also qualify as a distraction if they take a driver’s eyes and mind off the road, even for a few seconds. Texting and driving poses an especially high risk to drivers, as it is one of the rare actions that satisfies the definition of all three types of distraction.

In Florida, accident victims who sustain serious injuries in collisions often qualify for compensation from the at-fault driver who caused their crash. In distracted driving cases, this will require that a plaintiff prove that another driver was distracted, or wasn’t paying attention while driving. A wide range of evidence can be used to support this assertion, including video recordings from traffic and security cameras, which could show a driver using his or her phone, taking his or her hands off of the wheel, or otherwise violating a traffic law. Eyewitness statements from those who saw the accident occur can also be used to establish that another driver was distracted before a crash, as can data from in-vehicle technologies and cell phone records.

Successful plaintiffs who can prove that another driver’s distraction was the cause of an accident could be entitled to compensation for their losses, including reimbursement for past and future medical expenses and compensation for lost wages, property damage, and pain and suffering.

Call Goldman Law, P.A. at 407-960-1900 today to speak with a dedicated Maitland distracted driving lawyer about seeking compensation from the negligent motorist who caused your own collision. You can also set up a free consultation by reaching out to our legal team via online message.

By Goldman Law, P.A. | Posted on August 19, 2021
« What Is The Reasonable Person Standard?
The Dangers Of Tailgating »