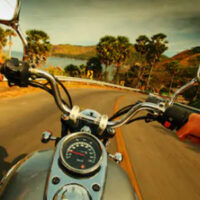 Motorcyclists are in a vulnerable position on the road, as they lack the metal frame of a vehicle to offer them protection in the event of a collision. Furthermore, motorcycles are far less stable than cars and are also less visible to other drivers. Because they do not have these benefits, or the protections offered by seat belts or airbags, motorcycle riders are much more likely to be injured in a collision than their motorist counterparts. In fact, it is estimated that motorcyclists are almost 30 times more likely to die in a collision than occupants of motor vehicles.

One of the most common types of motorcycle accidents is the left-turn collision, which occurs when a motorist turns left in front of a motorcyclist who is also attempting to turn left in a nearby lane. Whether the parties actually collide, or a motorcyclist is forced to swerve off the road (and potentially into other vehicles, pedestrians, or fixed objects), the consequences of these collisions are usually severe.

Head-on collisions between motorists and motorcyclists are one of the most devastating types of crashes. These accidents can almost always be attributed to someone’s negligence, such as falling asleep at the wheel, or driving while intoxicated. Even unfamiliarity with an area or an inability to see road signs can cause frontal crashes, which devastatingly, often prove fatal for the motorcyclist.

Anyone can be injured in a drunk driving accident. Motorcyclists, however, are at an especially high risk of being involved in this type of collision, as they often go unnoticed by drivers, especially if inebriated. To avoid being in a drunk driving accident, motorcyclists should refrain from riding late at night or early in the morning, when most of these types of collisions occur.

Lane change accidents are another type of crash in which motorcyclists are commonly involved. In most cases, these collisions occur because a driver failed to check his or her blind spot when changing lanes. To help prevent these kinds of crashes, motorists should always check their surroundings carefully and motorcyclists should always be aware of signs that a driver is preparing to change lanes.

Motorcyclists are also at risk of being involved in dooring accidents, which occur when a motorist opens his or her door (while parked on the side of the road) without checking traffic. A motorcyclist who strikes the door could be thrown from his or her motorcycle completely, suffering serious injuries upon impact.

Review your case with a dedicated motorcycle accident attorney by calling Goldman Law, P.A. at 407-960-1900 today.

By Goldman Law, P.A. | Posted on April 27, 2022
« A Few Things You Should Know About Florida Car Accidents
Recovering Compensation For A Hit And Run Accident »