Florida Motorcycle Laws You Should Know 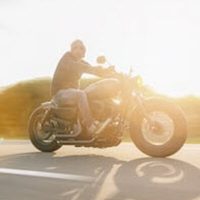 While the weather in Florida is nice almost all year long, the summertime tends to be especially lovely, so it shouldn’t come as a surprise that more people, especially motorcyclists, find themselves on the road during these months. Unfortunately, an increase in the number of people on the roads also comes with a higher risk of being involved in an accident, which is why it’s such a good idea for motorists and motorcyclists alike to have a thorough understanding of the state’s motorcycle laws.

Lane Splitting is Illegal in Florida

While some states allow lane-splitting, or driving between two occupied lanes, doing so in Florida is against the law. Instead, motorcyclists must have full use of a lane when riding in the state. Riders are also prohibited from even attempting to pass between occupied lanes.

Motorcyclists Can’t Ride Side by Side

Florida law also prohibits motorcyclists from riding side by side with another rider in the same lane. The lanes in the state are simply not wide enough to safely accommodate two riders, even if they seem to be. Riders who fail to follow these rules and end up involved in an accident could have a much harder time recovering compensation for their losses.

Optional Helmet Use for Most Riders

In Florida, motorcyclists who are under the age of 21 years old are required to wear helmets when riding. For those over the age of 21 years old, on the other hand, wearing a helmet is optional. Those who choose to go this route, however, should know that they must carry at least $10,000 in medical benefits through an insurer to pay for head or spine injuries in the event of an accident.

There are also specific rules regarding the equipment that must be installed on motorcycles themselves. For instance, Florida law requires that all motorcyclists leave their headlights on while driving, regardless of the time of day. This increases their visibility to other motorists on the road and can go a long way towards reducing a rider’s chances of being involved in a collision. Motorcycles must also be equipped with mirrors that allow the rider to see at least 200 feet behind them.

In Florida, those who have driver’s licenses can drive a motorcycle without getting a special license if they obtain a motorcycle endorsement. This in turn, requires the completion of a Basic Rider Course, provided by the Motorcycle Safety Foundation. Motorists who don’t have a regular driver’s license, however, will need to obtain a special motorcycle license before they can legally operate their motorcycle on Florida roadways.

Having a thorough understanding of Florida’s motorcycle laws can go a long way towards preventing accidents. Unfortunately, even the most careful of drivers or motorcyclists could end up involved in a crash, in which case, having an experienced attorney on your side can make all the difference to the outcome of your case. For help with your own claim, feel free to reach out to the dedicated Maitland motorcycle accident lawyers at Goldman Law, P.A. today. Call us at 407-960-1900 to learn more.

By Goldman Law, P.A. | Posted on August 23, 2022
« These Factors Could Affect Your Personal Injury Settlement
Traffic Fatalities Reached A 16-Year High In 2021 »