Are You Suffering From Whiplash-Associated Disorder? 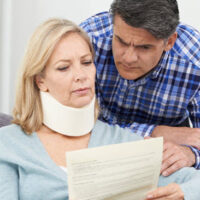 The types and severity of the injuries sustained by car accident victims depend on a number of factors, including the age and health of the injured party, as well as the type of accident in which he or she was involved, the kind of vehicles the parties were driving, the speed of the cars prior to collision, and whether the victim was wearing a seat belt. There are, however, certain types of neck injuries, including whiplash-associated disorder (WAD) that do tend to occur more often than others. These kinds of injuries can be devastating for accident victims, leaving injured parties with hefty medical bills and even chronic pain or permanent disability. For help recovering compensation for your own neck injury, please call our dedicated Altamonte Springs car accident lawyers today.

What is Whiplash-Associated Disorder?

Whiplash is a term used to describe the movement of a person’s head and neck (backwards and forwards) that occurs when it is subjected to an external force, like a car accident. This sudden whipping movement can cause serious injuries, which are often referred to as whiplash-associated disorder (WAD). These injuries are further classified into different grades based on their severity, as follows:

Each of these grades comes with its own set of symptoms. There are, however, certain symptoms that could affect someone suffering from whiplash-associated disorder regardless of the assigned grade. These include: dizziness, tinnitus, headache, memory loss, jaw pain, and deafness.

Why are the Whiplash Classifications Important?

While the grading system was originally put in place to help doctors develop treatment plans for patients, it is now often used to evaluate the severity of an accident victim’s injury for legal purposes. For this reason, the WAD grade that a person is diagnosed with could have a significant impact on the amount that a person is offered by an insurer or awarded in court after filing a personal injury claim. Generally, the higher the grade of whiplash disorder from which a person is suffering, the higher an award will likely be. This is not, however, the only thing that courts take into consideration when ruling on these kinds of cases, so it is important for accident victims who are suffering from a whiplash disorder to make sure that they collect other evidence to support their claim.

Having an experienced attorney on your side can make all the difference to the outcome of your personal injury claim. Call 407-960-1900 to speak to one of the dedicated Altamonte Springs car accident lawyers at Goldman Law, P.A. about your case.

By Goldman Law, P.A. | Posted on October 12, 2021
« Five Common Types Of Car Accidents And Their Consequences
A Few Tips For Sharing The Road With Semi-Trucks »